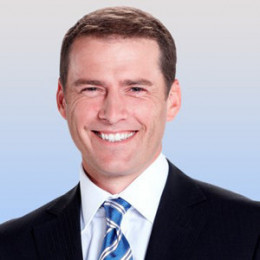 An Australian Gold Logie-winning television presenter, Karl Stefanovic is currently engaged to Jasmine Yarbrough. He was previously married to Cassandra Thorburn. He was born to Alex Stefanovic and Jenny Stefanovic. Karl received a degree in journalism from Queens land University of Technology in 1994. Currently, Karl is a co-host of the Nine Network's breakfast program, Today. Stefanovic also hosted the Nine Network's evening reports on the 2012 London Olympics.

Karl Stefanovic is the elder brother of Peter Stefanovic, who is also a Nine News presenter and reporter and Weekend Today host. He was married to journalist Cassandra Thorburn. They met at a party in Rockhampton in 1995. They are parents of three children named, Jackson, Ava, and River. But the couple ended marriage relationship in September 2016. His current relationship status is unknown for social sites.

Karl Stefanovic was born in Darlinghurst, New South Wales to a Serbian-German father and an Australian mother. His younger brother, Peter Stefanovic, is a correspondent with 60 Minutes. Karl Stefanovic went to the Anglican Church Grammar School and graduated from St Augustine’s College with a degree in journalism.

Stefanovic studied journalism at University but later failed to secure a cadetship. As per his father's suggestion, he auditioned for NIDA but did not make it all the way through. Despite receiving encouragement to re-apply the following year, he decided to take the job offer from WIN Television in Rockhampton instead.

Karl Stefanovic made his career as a Television presenter. His career began with an opportunity to work for WIN television in Rock Hampton and Cairns as a reporter. He became a reporter for One Network News in New Zealand.

Later he returned to Australia and started presenting news for Ten News in Brisbane. In 2000 he moved to Nine Network. He then shifted to program Today. The reporter also has served 2012 London Olympics. He also hosted TV panel show The Verdict.

Karl Stefanovic was married to Cassandra Thorburn. The pair met at a Melrose Place party in Rockhampton in 1995. They fell in love and subsequently married. The couple shares three children, named Jackson Stefanovic, Ava Stefanovic, and River Stefanovic.

In September 2016, it was revealed that Stefanovic had separated from his wife after 21 years. The divorce was finalized in October 2017. Thorburn reportedly received $6 million from her ex-husband.

Stefanovic subsequently moved on and began to date Jasmine Yarbrough after they met at a Sydney boat party mere months after the Nine star announced his split from his ex-wife.

While they were initially coy about their relationship, Stefanovic and Yarbrough steadily began appearing together at social events, and their engagement was announced in February of this year.

Speaking about their relationship, Jasmine said:

"Thursday nights I like to have date night with my partner. The time together in our busy worlds is so important and lovely. It’s vital to reconnect and communicate and most importantly laugh. And we laugh, all the time. There’s always a lot going on so finding the humor in life keeps you sane."

The couple was set to wed in December 2018 at the exotic seaside location of Cabo San Lucas, Mexico, but they later canceled the plans, although it just appears to be postponed at this point.

Meanwhile, in July 2016, Stefanovic received backlash from the LGBTQI community after using the word "tranny" and making a number of jokes deemed transphobic during a segment on Today.

On 29 July 2016, a day after the segment, Stefanovic made a public apology on the show stating that "I was an ignorant tool,” and further explained that he was informed of how offensive the term was considered.

Karl Stefanovic's net worth is estimated to be $10 million. His salary is reported to be $2.25 million annually. After his separation with his former spouse, it was rumored that Stefanovic had agreed to a 'divorce financial/property settlement'.

He was married to journalist Cassandra Thorburn, but they divorced in 2016.They met at a party in Rockhampton in 1995. They are parents of three children .

They are parents of three children named, Jackson. He has one sister and one brother.

Ava has two brothers and there is no information about her.

River has one sister and one brother. There is very few details about him on social sites.