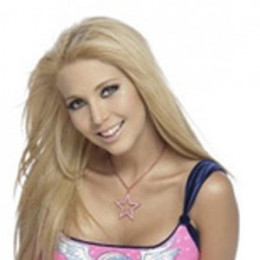 Karla Mora, this beautiful model is the lovely girlfriend of Guillermo Memo Ochoa the Mexican goalkeeper with the National team and former goalie with Ajaccio of France. Although she is known by her boyfriend name she is not married to him however they have together given birth to a baby. As she comes under a low profile model it is hard to find information about her childhood and family background.

Apparently Meme met Karla after his relationship with Dulce Maria, who is some hotshot Mexican actress and singer. He started dating Mexican model and designer Karla Mora in 2011. In August, 2012 Tv Notas Magazine reported Karla, was three months pregnant, at first it was speculated the whole preggo news was a rumor, but Ochoa confirmed it after he announced he would not be playing in the match between Mexico and Jamaica on February 6 because of Karla’s due date.

Karla gave birth to her beautiful baby daughter Luciana Ochoa Mora in France on February 6, 2013, the proud dad announced Luciana’s birth on Twitter, her name is also on the goalie’s shoes.