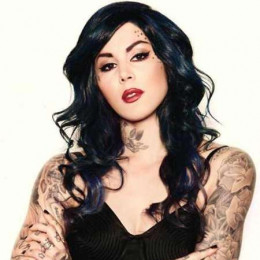 An American tattoo artist, musician, model, and television personality who has been featured on Miami Ink and LA Ink. She is daughter to René and mother Sylvia. She learned to play piano when she was just 6 years old. She was 14 years old when she got her first tattoo. When she turned 16, she dropped out of school to pursue her career as a tattoo artist. Shortly she worked in 305 Ink in Miami. She is also an author of "High Voltage Tattoo", which is ranked as the top 10 in New York Times Best Seller's List. In 2011 she launched her own clothing line named Kat Von D Los Angeles and KVD Los Angeles in the US and Canada.

She was married to her fellow tattoo artist. After four year long marriage relationship they got divorced. Since she is so popular it's not surprise that she has dated no. of guys. She has dated drummer motorcycle customizer and reality TV personality too. She even dated Canadian music producer professionally known as Deadmau5. She also gave him star tattoo below his eye to match her own. But unfortunately the couple has already broke up. Currently she is single.

Actually they were fellow tattoo artist. After 5 years long marital relationship, they got divorced due to some personal issues.