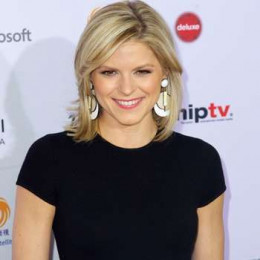 Katherine Jean Bolduan, better known as "Kate Bolduan" is a CNN News anchor. Currently she is working as a co-anchor for the show CNN Newsroom. Previously, she worked as congressional correspondent based in Washington, D.C. and as a general assignment correspondent for CNN. She studied at George Washington University from where she earned her bachelor's degree in Journalism. She was born to medical professional parents, Dr. Jeffrey and Nadine Bolduan.

Talking about her current relationship status, she is a married woman and the mother of a beautiful daughter. She has been enjoying her marital relation with her long time dated boyfriend turned husband since 2010 and still the couple have got the same bonding that they used to have at the time they first started dating each other. Currently, the family resides in New York. Being so popular, she hasn't been a part of any controversial issues till date.

He is the long time dated boyfriend turned husband of the gorgeous Kate. The two are married since 2010.

She is the only child of Kate, whom she gave birth at the age of 31.