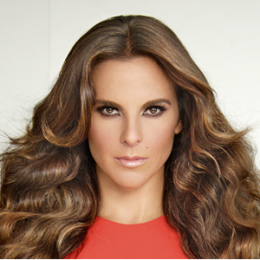 Mexican film and television actress, Kate del Castillo is mostly known for the popular Telemundo series La Reina del Sur. In 1998, she was nominated for a TVyNovelas Award for Best Young Lead Actress for her role in La Mantira. She was named one of the 50 most beautiful people in 2007 by People en Espanol magazine. She has also appeared in advertising campaigns for companies such as L'Oréal and Ford, and in the music video too.

Moving towards her personal life, she is known to have dated some of the great hunks in the past. But moving to the marital affairs, she was previously married to a football player for three years. They moved apart due to their personal problem. Then she was married to an actor known for starring in the teen Telenovela. However, this relationship also dissolved due to some personal problem.

Kate del Castillo was born as Kate del Castillo Negrete Trillo on 23rd October 1972 in Mexico City, Mexico.  Her parents are Eric del Castillo, father who is a legendary Mexican actor, and mother, Kate Trillo. She grew up with her two siblings, sister Veronica del Castillo and Ponciano, a half-brother from her father.

Kate del Castillo made her debut in the movie The Last Escape, in 1978. However, she gained fame through her lead role in the telenovela Muchachitas for Televisa in 1991, when she was just 20 years old.

Afterward, she continued her career in film and television in Latin America. Kate earned fame in the US for playing the lead role in La Reina del Sur. This led to her landing roles in several American TV series. She also featured in supporting roles in many Hollywood feature films.

Kate del Castillo initially dated Emilio Azcarragea Jean, now CEO of the largest mass media company in Latin America. However, the pair were together for only a brief period. On 3rd February 2001, the actress married footballer Luis Garcia.

The couple was happily married for three years, but their relationship did not last long as they divorced on 1st September 2004. She then took a break from her love life before she began to date Aaron Diaz.

The couple took their relationship to next level as they decided to get married. The wedding was held in August 2009 in a Las Vegas Ceremony. However, after two years of their marital relationship, just like Kate's previous one, the couple announced their separation.

Moreover, Del Castillo was briefly romantically linked with Sean Penn during 2015 and 2016.

It is frequently reported in the media that del Castillo was romantically involved with Joaquin "El Chapo" Guzman. This caused a stir of controversies. However, the actress strictly denies these allegations.

This all began on 9th January 2012 when Kate publicly posted a tweet that had a controversial remark towards Joaquin Guzman Loera. The most notable portion of the essay within the tweet was:

"Today I believe more in Chapo Guzmán [than in] the government that hides painful truths from me, that hides the cure for cancer, AIDS, etc., for their own benefit and wealth."

Guzman is known to be a fan of the actress. Following Guzman's escape from prison in July 2015, Kate brokered an interview between American actor Sean Penn and Guzman in October 2015, where Guzman gave Penn permission to write a story about him for Rolling Stone magazine. The drug lord was recaptured soon after.

Kate earns a good sum of money from various brand and commercials. She launched brands such as Tequila Honor del Castillo as well as advertised for fashion and cosmetics products such as PETA, Ford, and L'Oreal.

On 3 February 2001, she was married to a football player Luis García. The marriage was dissolved on 1 September 2004.

In August 2009, del Castillo married Aarón Díaz in a Las Vegas ceremony. On 26 July 2011, it was announced that Kate and Díaz were separating.