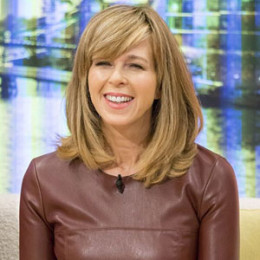 Kate Garraway was born on 4th May 1976, Abingdon-on-Thames, Berkshire, England. Her father was a civil servant whereas her mother was a teacher. She grew up in the middle-class family in the city of Berkshire.

She attended Dunmore Primary School and moved to Fitzharrys School. She completed BA in English and History from Bath College of Higher Education.

In 1997, she gained national attention after she presented the Good Friday Agreement on BBC News 24. She also joined Sunrise on Sky News along with Martin Stanford.

In 2000, she becomes a part of GMTV where she co-presented GMTV Today with Andrew Castle every Friday. During the period, she also got a chance to co-present with Eamonn Holmes, John Stapleton, and Dan Lobb. She left the show on 31st August 2010, for ITV Breakfast show.

Kate worked as an entertainment editor of Daybreak on ITV Breakfast in September 2010. The show was later named Good Morning Britain which she co-presented with Ben Shepard on 3rd March 2014.

Nowadays, she occasionally presents The National Lottery Draws on BBC One. Apart from hosting the TV show, she also participated in the fifth series of Strictly Come Dancing along with professional dancer Anton du Beke, where she finished 8th of the 14 couple.

She also broadcasted the BBC Radio Oxford and by 1994 she became an Independent Television News trainee journalist. She also presented a mid-morning show weekdays on Smooth Radio in March 2014. Moreover, she will make a cameo appearance in a British soap opera, Hollyoaks, created by Phil Redmond in September 2017. She released her first book, The Joy of Big Knickers, on 9th March 2017.

Kate has married twice. Firstly, she married Ian Rumsey, a former boss at ITV Meridian, in the hometown of Abingdon, Oxfordshire in 1998. Later, the couple divorced in April 2002 due to their personal reasons.

After divorce with her first husband, she married Derek Draper in September 2005. The wedding ceremony was held in Camden, London. The husband and wife are blessed with two children: daughter, Darcey Mary Draper and William Garraway Draper.

She is involved in different charity events and is a charity ambassador for the Make-A-Wish Foundation founded in the United States on 29th April 1980.

Kate is one of the successful TV and radio presenters who has spent her entire life presenting shows. There is no such exact figure to her net worth, but looking to her lavish lifestyle she probably enjoys a net worth of more than a million. Her source of net worth includes presenting the shows, books and acting as well.

Ian Rumsey is the first husband of Kate Farraway to whom she married in her hometown Abingdon, in 1998. Ian is the former boss at ITV Medirian. After staying 4 years of a married relationship, the husband and wife divorced in April 2002.

Derek Draper is the second husband of Kate Garraway. Derek was a political aide to former Labour cabinet minister Peter Mandelson and was at the centre of the scandal known as Labbygate. The couple married after 6 years of her first divorce in September 2005. The couple is blessed with one daughter and one son.