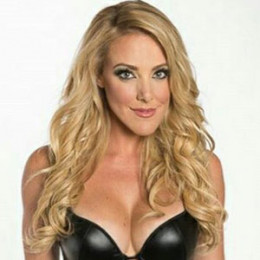 Is Kate Quigley Dating or Married to Someone?

Before that, she was married to her senior year of high school. But not really a high-school sweetheart. They only kindled romance for a year and then took a relationship to the next level. Further, she and her spouse moved to Chicago and lived as husband-wife for ten years. At the time, she was just nineteen years old. Unfortunately, they parted ways with divorce in 2012.

Followed by the bitter split, she developed a feeling of co-dependent and emptiness. Kate learned to overcome the pain after she reached age 31. She was hitched to a guy who just did everything to let her feel good. The split was amicable and they remained friends.

What is Kate Quigley Up To Now?

The renowned American comedian and actress most recently attended Orlando Improv, the comedy club comedy and dinner theater in Florida with a fellow artist Donnell Rawlings.

On 2 January 2020, Kate took a cartoonized picture of herself with Rawlings captioning, "Surprise! 4 shows with my boyee! Get There!!".

American podcaster, Kate Quigley also has done breast implants in the past few years. Now, as the surgery didn't go well it had to be redone three times.

What is Kate Quigley's Net worth?

Kate Quigley makes a decent amount of money from her successful career as an actress and stand-up comedian, which adds up to her net worth that is estimated to be $3 million. She gets paid hundreds of dollars for hosting the Playboy TV show "Uncover".

Quigley has already toured almost many parts of the world as a leading comedian. She's just returned from Armed Forces Tour, participating for troops in Japan, Singapore, Diego, Garcia, and Guam. She is a paid regular at Improv, Icehouse, Haha Comedy Club, and Laugh Factory in Hollywood.

Some of her famous TV shows include The Office, Talkshow with Spike Feresten, The Danny Comden Project, The Megan Mullally Show. The blonde beauty hosts a show, The Hollywood Pool Party on Periscope which grabs over 20,000 views and 30,000 downloads per episode.

She kicked off her career as a fitness model, before being a stand-up comedian. She did a show at Ontario Improv in her bikini proving that one can be attractive and funny at the same time.

Kate's skit is called naughty comedy when she performs at the Comedy Club. She has also made her appearance is The Naughty Show, hosted by Sam Tripoli.

Kate also hosts her podcast #Datefails with Erik Myers and it is about her going through the process of dating someone in her 30s, as she did not experience any of these in her teenage.

Most of her material in stand up is derived from her personal experience being single after she divorced her husband.

She also featured in Playboy Tv's show Undercover. She shared that she most enjoyed the episode Fire Play where she was lit up wearing a fire suit and Foot sucking episode being the least favorite in which her foot was sucked by someone.

Kate Quigley was born on 8th February 1982 in Canton, Ohio, U.S.A. She is currently 37 years of age. Her mother ran a day-care center, where many boys attended. She had a tomboy personality while interacting with boys at the day-care center.

She had a plan to join an acting school in Los Angelos. However, she moved to Chicago after completing high school and was offered a scholarship. Quigley graduated from Roosevelt University majoring in performing arts in 2004.

During her college days, Quigley tried stand-up comedy for the first time and found her passion for comedy. Later in the year 2006, she moved to California to pursue her career in comedy and acting.

Kate Quigley married her college boyfriend when she was 19 years old. Their marriage lasted for a decade before they decided to get a divorce.