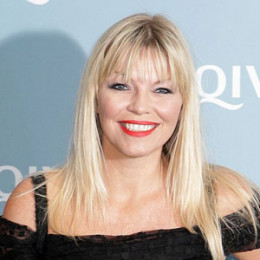 Kate Thornton was born Kate Louise Thronton on February 7, 1973. She was born and raised in Cheltenham, Gloucestershire, England. In an interview The Sun, she revealed that She has joined a college to continue her education.

Thornton began her career as an editorial assistant of Sunday Mirror in 1992. Later in 1995, she transferred to the Daily Mirror with her own daily entertainment column. Her skillful and hard work resulted in her promotion as an editor of magazine Smash Hits.

Kate started to work on television with her first debut on ITV current affair program Straight Up. She served as a presenter and host in several series. She was the first one to present the UK series of The X Factor which gained her a new height of success. Afterward, she anchored in ITV’s daytime series Loose Women in rotation with Andrea McLean. Thronton then became a regular stand-in presenter on This Morning followed by the first series of 71 Degrees North alongside Gethin Jones. In 2012 she made her guest appearance in Lorraine. She also worked on BBC Two’s gravity games, Channel 4’s Women: Naked Truth Honest and Sky 1’s Breast Uncupped.

Besides television and magazines, Kate has been engaged in radio too. In 2002, she presented a number of programs for BBC radio 2 and also wrote a radio documentary From Band to Brand in 2004. Likewise, she is a successful journalist leading her successful career.

Thronton had a romantic relationship with DJ Darren since 2004. After several years of their dating, the couple finally got engaged in 2007. The duo is blessed with a son together namely Ben on May 13, 2008.

As of now, Kate is enjoying her single life. She split up with her ex-fiance in 2011, which she revealed publicly in February. These days she is fully focused on her career and education which leaves her no time to be in any other affairs.

Thronton is well paid as a journalist and a Television presenter. According to the salary statics of 2017, her net worth is recorded to be $1.4 million. She has well maintained her life style through the amount she earned.