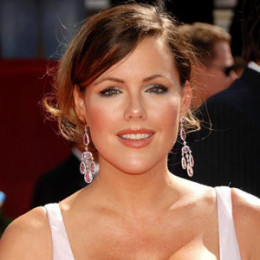 Kathleen Robertson is a Canadian actress and producer known for her role as Tina Edison, in the sitcom Maniac Mansion and has played in many series. Robertson also starred in a number of films. Kathleen has attended a local private school and started taking acting class when she was ten and has roles in local theatre productions. Her first television guest appearances were in My Secret Identity and E.N.G.

Kathleen Robertson was born on 8th July 1973 in Hamilton, Ontario. Her parents are Gary Robertson and Joyce Robertson. She went to Sherwood Secondary School and later joined a local private school named Hillfield Strathallan College. From her early age, she was interested towards acting, which led to her taking acting classes.

Robertson's initial TV appearances were in The Campbells, My Secret Identity, and E.N.G. Meanwhile, her debut on the big screen arrived in 1985 when she appeared in the movie titled Left Out.

Robertson is best known for her roles as Tina Edison in the Canadian sitcom Maniac Mansion (1990–1993), and as Clare Arnold in the Fox teen drama series Beverly Hills, 90210 (1994–1997). In 2014, Robertson began starring as homicide detective Hildy Mulligan in the TNT series Murder in the First.

Robertson dated director and independent filmmaker Gregg Araki from 1997 to 1999. These two had also worked together and Gregg is now identified as bisexual. He has dated many men after splitting with Kathleen.

Kathleen is married to Chris Cowles since 2004. Willian Robertson Cowles is her first child, born on July 9, 2008, at Cedars-Sinai Medical Centre in Los Angeles. The couple is usually going out with their son and often spotted on the streets of West Hollywood, California.

Meanwhile, the actress went under the knife for Rhinoplasty and breast augmentation. Subsequently, she also enhanced her lips, making it more fuller and defined than before.

Kathleen Robertson's net worth is estimated to be $3 million. Her source of income includes her salary and earnings from her career as an actress and producer. She is also collecting $78,431 from her endorsement deals done with different brands and products.