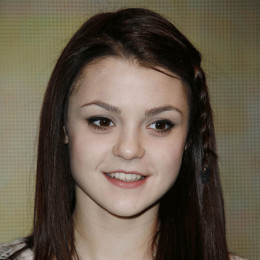 Kathryn Prescott also known as "Kat Prescott" is a British actress and a professional photographer. She came to prominence after playing on the teen drama series Skins, as Emily Fitch, in the 2014 MTV drama Finding Carter, as Carter Stevens and also starred in the 2011 TV mystery series Bedlam. She was raised by her parents along with her twin sister Megan Prescott, who is 6 min older than her.

Accounting her personal life, she hasn't married anyone yet and also does not have any child. Currently she is dating a actor whom she first met on the set of Skins. She might have dated lots of handsome hunks in her past days but there is no any record in this regard. She has stayed a bit of low profile when it comes to her family matters. There is no controversy related to her.