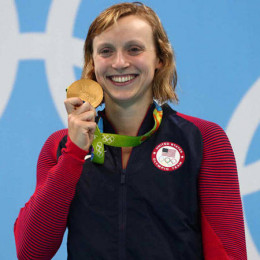 American competitive swimmer, Katie Ledecky is the daughter of Mary Gen (Hagan), swam for the University of New Mexico and David Ledecky. She is a five-time Olympic gold medalist and nine-time world champion. Katie attended Little Flower School and graduated from Stone Ridge School of the Sacred Heart in 2015. She has won Swimming World American Swimmer of the Year Award in 2013 as well as in 2014, 2015 and 2016.

Katie Ledecky is involved with many charities such as Catholic Charities, Shepherd's Table, Bikes for the World, and Wounded Warriors. At the 2016 United States Olympic Trials in Omaha, Nebraska, she won the 200-, 400- and 800-meter freestyles to qualify for her second Olympic team. During the 2016-17 NCAA season, Katie set five NCAA records and two American records while swimming as a freshman at Stanford University.