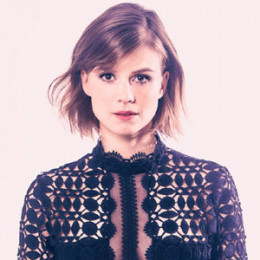 Katja Mira Herbers, better known as Katja Herbs, is a Dutch actress who is famous for her role Dr. Helen Prins on popular TV series Manhattan, created by Sam Shaw. She has an appearance in theater, movies, and television. This beautiful Dutch is still single and focusing on her career rather investing her time in a relationship.

Born on 19th October 1980, Amsterdam, Netherlands, Katja Herbers is the daughter of violinist Vera Beths and oboist, conductor Werner Herbers. Though she was born in Netherland, she spent her childhood in America to accompany her mother on tour with group L’Archibudelli.

There is a tragic love story between her parents: her mother is remarried to cellist Anner Bylsma whereas her father remarried customer designer Leonie Polak. It was her step-mother, who introduced her to the theater.

She attended Ignatius Gymnasium in Amsterdam but later she studied psychology at the University of Amsterdam. During her time at the university, she also attended the local theater school, De Trap. She is fluent in speaking Dutch, German and English and had a Canadian au pair (a domestic assistant from a foreign country working for and living as a part of a host family).

After that, she moved to New York and joined HB Studio and Theaterschool, where she did four years Bachelor’ degree course in theater and dance.

Katja began her career as an actress from Maria Peters’ directed Dutch family movie, Peter Bell, in 2002. The movie was based on Pietje Bell books of Chris Van Abkoude which received a Golden Film (75,000 visitors) and Platinum Film (200,000 visitors) in the same year.

After the success of the prequel, Peter Bell II: The Hunt for the Czar Crown was released in 2003. The movie received a Golden Film (100,000 visitors) and Platinum Film (400,000 visitors). The same year, she was cast in Kees de jongen and Brush with Fate.

Also, see; Androgynous Model; Rain Dove Poses as Both Male and Female; See her Career? Is she Dating?

In 2004, she made her appearance in theater act, The Terrible Mother, along with Alex van Warmerdam and De Mexicaanse Hond. She has cast in different theater act including Life is a Dream in 2006, The Vast Domain in 2007, The Lonely Road in 2008, The Mother in 2012, Platform and An Ideal Husband in 2013.

In 2013, she was cast in an American period drama television series, The Americans, as a recurring character, created by Joe Weisberg3. The series starred Keri Russell, Matthew Rhys, Holly Taylor, Noah Emmerich, Annet Mahendru, Susan Misner, Lev Gorn and so on. The show has done 65 episodes in 5 seasons which aired internationally in Australia on Network Ten, Canada on FX Canada, Ireland on RTE Two and The United Kingdom on ITV.

Her role Dr. Helen Prins on the American drama miniseries, Manhunt: Unabomber, created by Anderson Sodroski, in 2017, gained her popularity among the viewers and critics.

Moreover, she has performed the piece I'm wunderschonen Monat Mai, 21 songs after Schubert and Schumann with Pianist, conductor and composer Reinbert de Leeuw in 2013.

Talking about Katja’s personal life and love relationship, she is currently single. She is quite a secretive regarding her love life and has never revealed having a boyfriend or her affairs. Even though she is not dating anyone, she looks like she is enjoying her single life.

This beautiful actress is involved in various social activities and has joined a lot of activities to spread awareness around the world, be it standing for the LGBT community or Muslim community.

Katja is one of the rising stars of the Hollywood industry who has got a huge career in her near future. Though her net worth is not revealed in social media, she probably enjoys a net worth not less than seven figures.