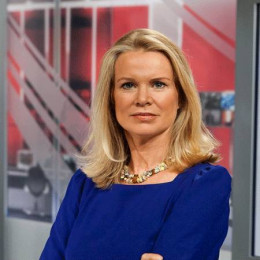 Katherine Kay aka "Katty" is a British journalist, best known as a lead anchor of BBC World News America. In 1990, she joined BBC for the African section of the BBC World Service, as Zimbabwe correspondent. She graduated from the University of Oxford, there she studied modern languages and after graduation she worked for the Bank of England. She was raised by her father who was a British diplomat.

Katherine Kay is professionally called by Katty Kay. She was born on November 14, 1964, in Wallingford, Oxfordshire, United Kingdom. Her father was a British diplomat and her mother was a journalist.

She was raised  Blewbury, Berkshire and spent most of her time various Middle East countries. She can fluently speak French and Italian. Katty completed her education from the University of Oxford where she studied modern languages.

Soon, after her graduation, Kay began her career at the Bank of England and worked for a certain time. Later she left the job and joined an aid agency in Zimbabwe. In 1990 she served as Zimbabwe correspondent for the African section of the BBC World Service.

Katty served the Tokyo branch for about four years and then in 1996, she began working for the Washington, D.C. branch. She worked for The Times till 2002 when she moved to the United States to join the BBC once again.

In June 2004, Katty worked as a co-presenter of the BBC World’s news program. Kay and Claire Shipman wrote a book titled Womenomics published by Harper Collins.

Katty Kay is a married woman. She ties a knot with Tom Carver, one of the famous writers. Her husband was a former reporter for BBC and currently served as Senior Vice-President at the Control Risks Group, a consulting company.

The pair shared four children; three daughters Poppy, Jude and Maya and a son Felix. Kay is living a blissful married life with her spouse and kids. There aren't any kinds of rumors regarding her divorce or split.

Kay has earned an impressive net worth from her career but she hasn't revealed the exact figure. However, it is believed to be in millions of dollars.

He is the first husband of Katty, best known as ex-BBC reporter and current Control Risks Group senior vice-president.

She is one of the daughter of Katty and her husband who was born safe and sound.

He is the only son of his parents who was born healthy.

She was born healthy. Her date of birth and current status is unknown.

She was born healthy. Her birthday and current status is unknown.