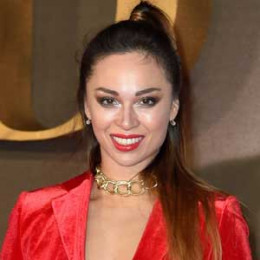 Katya Jones is a Russian dancer plus choreographer who is known from Strictly Come Dancing, a BBC One dance show. During the show, she was paired up with Ed Balls, best known for his Gangnam Style in the show. She is married to Neil Jones and living a pleasant life with her spouse.

Born as Ekaterina Andreevna Sokolova on 12th May 1989 in Saint Petersburg, Russia, she at the young age of 6 started learning dancing as well as gymnastic. She also trained in Ballroom and Latin American dancing styles.

Katya is of mixed ethnicity as her mother is from Korea and father from Russia. Her father is a wealthy businessman, so Jones was born with a silver spoon.

Katya earned fame in the industry after participating in Strictly Come Dancing a BBC ballroom dancing show in 2016 in the 14th series. She was paired with Ed Balls in the show and placed fifth. Ed Balls is the most high profile contestant of the show, and also a former chancellor famous for his Gangnam style moves in the show.

Katya and Neil got married in August 2013 after dating for a long time. They got married in London. The couple looks adorable together and uploads many photos on social networking sites. They lovebirds don't have any children till date.

Katya Jones might have an estimated net worth in six digits. She is living a lavish life. As per her photos on Instagram, Jones is seen wearing glamorous and branded dresses that look beautiful and expensive. She has 27.1k followers on Instagram and 16k on Twitter.

Neil Jones and Katya Jones were in relation from 2008 after they paired in a dance show. Moreover, they got married in 2013 and had no children yet.