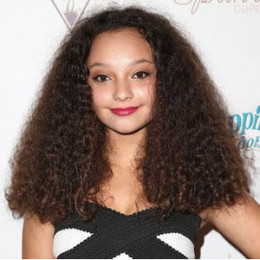 An American actress, Kayla Maisonet is currently single. She is a daughter of Amanda. Kayla is famous for her role as a Lindsay in a Disney Channels series "Dog with a Blog" as well as Lilly on Nickelodeon's "The Haunted Hathaways". Kayla began her dancing career at the age of five. Her first movie is A New York Fairy Tale, she has a role of Bella.

Kayla Maisonet has won 35th Young Artist Awards in a category of Best Performance in a TV Series by her movie Recurring Young Actress. Kayla also signed the role of Lilly in The Nickelodeon TV show "Haunted Hathaways" and she has a guest appearance in the NBC comedy sitcom "Mulaney". Currently, Kayla is busy in a shooting the new Disney Channel show, starring as Georgie "Stuck In The Middle".