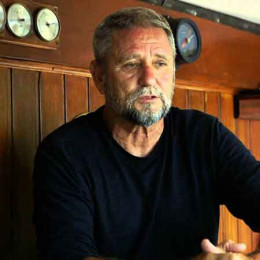 Keith Plaskett is an American Undersea Explorer who is best known for his performance in the reality TV series Treasure Quest aired on Discovery channel where he searches for the legendary trove of Incan treasure along with his crew members. In 2001, Plaskett created the guide for scientific diving. As of 2018, he lives and works in Peru, finding and documenting underwater shipwrecks and diving.

Keith Plaskett was born on Oklahoma, the United States. He completed his schooling from the local school at Oklahoma. Soon after school, he joined military and at the age of 18 and served in Vietnam. He lived through 4 major battles during his tenure including 1968 Tet Offensive in the northern part of South Vietnam. He also became an esteemed Navy Special Warfare, EOD.

Plaskett is a USCG Licensed captain, operating vessels in the Gulf of Mexico, Pacific, Caribbean, Atlantic, and West Indies ocean. He served as the president of the Peruvians nonprofit association Mares Del Sur and worked with Peruvian universities to develop an underwater archeology program.

In 2001, Plaskett created the guide for scientific diving for UWF Scientific Diving Program. After two years, he again revised the document to reflect lessons learned from program operations. Since 2015, he is the regular crew member in the Discovery Channel reality series, Treasure Quest: Snake Island. The show follows a crew of treasure hunters led by Cork Graham, searching for the legendary trove of Incan treasures.

Keith Plaskett is possibly single at the moment but he has three daughters from his previous relationship whom he raised as a single parent. He has seven grandchildren, and two great-granddaughters to whom he referred as apples of his eye.

Plaskett has a great deal of experience with underwater excavations and archeology. He loves to spend time in the Amazon jungle exploring, for lost ancient Inca cities when he hasn't searched for treasure.

Plaskett is an Undersea Explorer who also worked in navy and military. He accumulated a good sum of the amount from his career. The average salary of the US military is $109k and Plaskett. He is also known for his appearance in Discovery series, Treasure Quest and earned a handsome salary.

Check out the video of Keith Plaskett,