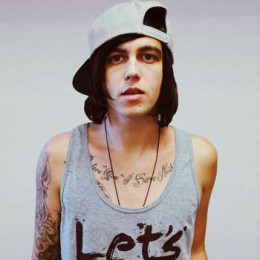 This versatile man is a rock singer, best known as a vocalist of the post-hardcore rock band Sleeping with Sirens, along with band members Jake Fowler, Gabe Barham and Justin Hills. He started his singing career with a band called Closer 2 Closure before he rose to fame. Besides singing, he also has a clothing line named Anthem Made. He is a proud son of Jeuse and Mary Quinn.

Talking about his relationship status, he is a married man and father of an adorable daughter. He has been enjoying his marital relation since 2013. His wife has two sons from her previous relationship, which Quinn has now been accepting as his step sons. The family resides in Medford, Oregon. We can stay connected and know him in a better way simply by following him on Twitter @Kellinquinn.

She is the one and only beloved wife of Quinn, who models for her husband's clothing line Anthem Made.

She is the only daughter born to Kellin, who is very cute and adorable.

He is the stepson of Kellin, who is very well mannered and obedient.

He is the step-son of Kellin, who was born safe and healthy.