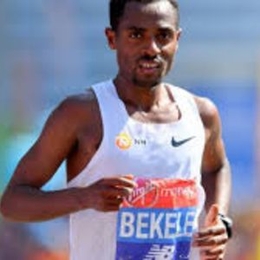 Kenenisa Bekele is an Ethiopian long-distance runner who won Olympic gold medals. People recognize him as one of the pre-race favourites who's withdrawn from the 2020 London Marathon on 4th October with a calf injury.

Kenenisa Bekele is an Ethiopian long-distance runner who won Olympic gold medals. People recognize him as one of the pre-race favourites who's withdrawn from the 2020 London Marathon on 4th October with a calf injury.

Kenenisa Bekele is happily married to the love of his life. He tied the knot with Ethiopian film actress, Danawit Gebregziabher on 18 November 2007. Their intimate ceremony was held at Addis Ababa. 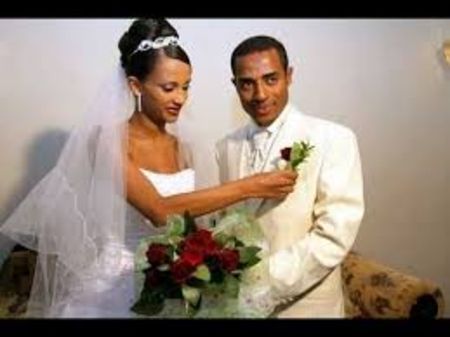 Bekele and wife Danawit have successfully crossed twelve years of wedding. Regardless of that, the duo doesn't have any children. Probably, Kenenisa hasn't decided to extend family members because of a hectic work schedule.

The Bekoji native was hit by tragedy on January 4, 2005, when his fiance Alem Techale died of a heart attack. Techale was training with Bekele in a hilly area on the outskirts of Adidas Ababa during her last breath.

Alem, 18, who was set to marry the six-time world cross country champion in May died on the way to the hospital. IAAF President Lamine Diack expressed his condolences to Bekele and also said he recalls meeting her at the last edition of the World Athletics Gala.

Kenenisa Bekele made his Olympic debut in 2004 at the Athens Games, achieving the silver medal in the 5000 meters and the gold in the 10,000 meters. He became second in the 10,000-meter world championship in 2005 and 3000 meters at the IAAF world indoor championships and 5000 m at IAAF World Athletics Final. 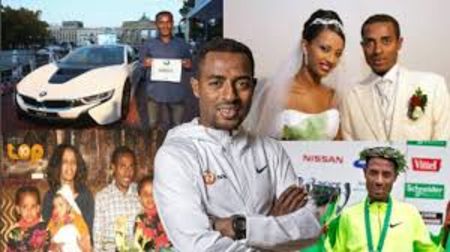 In between 2009 and 2012, Kenenisa won numerous world championship including 10000 meters tying Gebrselassie's record. He broke the world record in the 5000 meters and 10,000-meter races many times.

Besides, Bekele underwent a series of injuries that limited his competitive races in his career leading up to 2012 London Olympic games. He finished in fourth place in the one event he qualified for.

Kenenisa Bekele was born on 13 June 1982 in Bekoji, Ethiopia to Ethiopian parents. He has a younger brother, Tariku Bekele, who is also a word class distance runner.

African by ethnicity, he stands at a height of 5 feet 5 inches (165 cm) and weighs 56 kg (123 lb). Bekele had a keen interest in athletes especially marathons at an early age and later pursued the field as a career.

For five years in a row, he took both short and long races at the IAAF World Cross Country Championships, a feat no other runner ever accomplished once. Today, he is renowned for his ability to accelerate very steadily at the end of the long-distance race held in Oslo.

Kenenisa's splendid track career led to his involvement in a project to break the two-hour barrier for the marathon via a number of factors undermined this effort.

Kenenisa Bekele is happily married to girlfriend Danawit Gebregziabher for 12 years. She said "I Do" during a ceremony at Addis Ababa.

Elnata Bekele was born as the first child to Danawit Gebregziabher and wife Kenenisa Bekele. She has two siblings Elsama and Wgus.

Elsama Bekele was born as the second child to Kenenisa Bekele and Danawit gebregziabher. Elsama has a sister and brother Wgus,