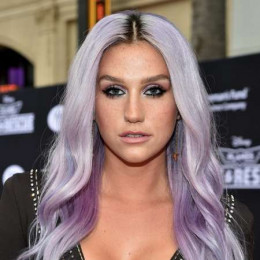 An American singer songwriter and rapper who is better known as Ke$ha and her debut single "Tik Tok" which charted in no. 1 position in nine countries and held the record of the second best-selling digital single in history. She was raised by a single mother who was also a singer and songwriter Patricia Rose "Pebe" Sebert. She was just 18 years old when she was signed Dr. Luke's label, Kemosabe Entertainment. She has also sang background vocals and wrote music for many famous artist like Katy Perry. According to her Madonna, Queen, and Beck are her source of inspiration. Since her debut in musical career she has been nominated for over 60 awards and has more than 13 awards. In 2010 she was awarded wit prestigious MTV Europe Music Award for Best New Act. By 2013 her music has been sold around 55 million records worldwide.

She is openly bisexual. She has performed legal commitment ceremonies for many gay couples. Talking about her marital status she has not married yet. She was rumored to be dating popular singer Adam Lambert but neither of them confirmed the rumor. She has also dated few singers and drummers. Currently she is in relationship with her boyfriend who is very tall and handsome with beards.