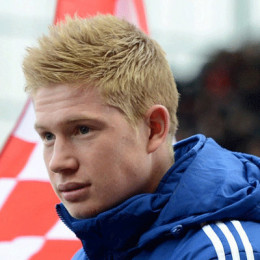 Kevin De Bruyne is a Belgian professional football player who is currently playing for the Bundesliga club side Vfl Wolfsburg and in the Belgian National Football Team as an attacking midfielder or winger wearing jersey number 14. He started his youth career at KVV Drongen in 1997 and made his professional debut in 2008 from the club Genk. He is playing for the Belgium National team since 2010. He has been playing in the youth team of the national team as well.

Kevin De Bruyne's Personal Life: Is He Married to his Longtime Girlfriend?

Kevin De Bruyne with his wife Michèle Lacroix and their Children.

In 2017, The Guardian named him as the fourth-best footballer in the world.