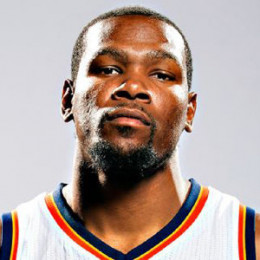 An American professional basketball player, Kevin Durant is currently relationship with Jasmine Shine since 2014. He was born to Wanda (nee Durant) and Wayne Pratt and grew up with his grandmother, Barbara Davis. During his only season at the University of Texas, Kevin averaged 25.8 points per game and 11.1 rebounds per game and selected 2nd overall in the 2007 NBA Draft by the Seattle SuperSonics.

Kevin Durant won an NBA Most Valuable Player Award, four NBA scoring titles, the NBA Rookie of the Year Award, and two Olympic gold medals. He is rumored to have hooked with model Joie Chavis (2014) and singer Letoya Luckett (2011 - 2012). Kevin Durant dated to the basketball player, Monica Wright and engaged in 2013 but they ended their relationship in 2014. Currently, Kevin is a relationship with Jasmine Shine since 2014.