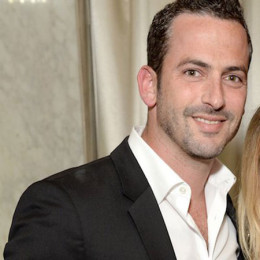 Kevin Lazan is a lawyer and the founder of the company named The Gables. Lazan started his career as a junior agent in PuckAgency, LLC. He also works as a lawyer. Lazan is the husband of Emmy Award-winning singer-songwriter Rachel Platten. He currently resides in Santa Monica, California with his wife.

Kevin Lazan was born in 1981 in New York City. He is American and belongs to the White-American ethnicity. In 2002, he earned Bachelor’s degree in legal studies and journalism from the University of Massachusetts.

He attended the Pace University School of Law in 2006 where he earned his degree in law.

Kevin Lazan started his professional career in 2002. He worked as a junior agent in PuckAgency in December 2002. Lazan worked at the company for three years. He joined Railway Media, LLC as an operations manager in 2006.

In December 2006, Lazan co-founded CR Media, LLC. He worked at the company as a strategy and operations manager for over 1 year.

Lazan joined Capgemini Consulting in Greater New York City Area as a managing consultant, strategy & transformation in June 2009. He worked there for over 4 years. He worked as a director (NY Advisory Practice) at Next Street.

He left his high paying job in finance to open the restaurant. He partnered with Superba and Beacon veteran Vicki Fan Matsusaka and former restaurant group manager Juan Ramirez.

Kevin Lazan is a married man. Lazan is married to his longtime girlfriend, Rachel Platten, a singer and songwriter in 2012. The couple first met in 2006 during her trip to New York.

In an interview with Southern New England Wedding, she stated they started dating in late 2016. Their first date at a bar didn't go well but Platten was instantly struck by Lazan. Though she claims the bar they went to wasn't a good first date place.

Kevin was quite embarrassed because the bar was full of girls snuggling onto one another. It was as if it was a lesbian bar. He even said how he never wanted her to come to such a place.

Then during their trip to New England, Kevin proposed to his girlfriend. Soon they started planning for their marriage. The singer had envisioned her wedding in homely and cultural style.

The pair tied the knot in a traditional Jewish ceremony at Mount Hope Farm in Bristol, Rhode Island. They exchanged vows in a Jewish ceremony. She wore a beautiful plain white right shoulder cut gown.

Lazan currently resides in Santa Monica, California with his wife. They recently moved from their apartment at Battery Park in New York. The couple is together and is sharing quality times over the decade. They have no children yet.

She is a devoted wife and wrote few songs for her husband. One time when Kevin's father was sick, he visited his parent's house which was approximately 3,000 miles away from their current residence. Because of her career, she couldn't join him but she wrote the song, Superman, explaining Kevin's struggle with his father's illness.

The song, Collide was about how her husband makes her feel special on her skin. She explained he made her feels extra special and that was the reason and inspiration behind the song.

Kevin Lazan has an estimated net worth close to million dollars as per his earning and lifestyle. However, the exact amount has not been confirmed yet. His wife's net worth is $4 million.

The couple owns a house in Santa Monica, California, US. They recently lived in an apartment at Battery Park in New York. He used to work as a Management Consultant and the average salary of a consultant is around $60,000.

He was the Director at Next Street and the average salary of a Director in an Advisory Practise is around $175,000.

Kevin Lazan and his longtime girlfriend exchange the vows in 2012 in a traditional Jewish ceremony which was held in at Mount Hope Farm in Bristol, Rhode Island.