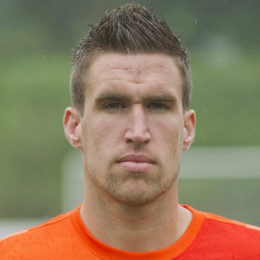 Kevin Strootman is a Dutch footballer and plays as a midfielder for Italian club Roma and on the national team of Netherlands. He had played for several clubs scoring many goals. He is a successful football player making continuous progress in his career.

Dutch player Kevin Strootman was born on 13 February 1990 in Ridderkerk, Netherland.  He is the son of Diana Berkelouw. Kevin had a keen interest in football from the very young age.

Pursuing his dream, Strootman started playing with Sparta Rotterdam. He made his professional debut in the 2007-2008 season. Later on, his contract with the club was extended up to 2011. In the same year, he made his senior international debut against Austria. He has played in 72 matches scoring eight goals for the same club.

In 2011 Strootman made a lot of progress in his career joining Utrecht. He played 14 games and scored two goals for the team. Afterward, he moved to one of the top clubs in Netherland PSV the same year playing 62 games bagging eight goals. He was also chosen by the Netherlands National Football Team in 2011.

In 2013 he was transferred to Italian Serie A side in the top club Roma from PSV. He has contributed five goals for the team in 24 matches. Throughout his career journey, he has played several international matches.

Thara Pols is the long-time girlfriend of the 27-year-old footballer Kevin. The duo first met in Rotterdam and eventually fell in love with each other after they started dating 2008. They share a strong bond, and there is no sign of them splitting up in the future. If the couple's relationship continues this way they may even get married.

The talented player Kevin earns a decent salary from his profession. He has accumulated an estimated net worth of $12 million with the yearly salary of $3 million. He endorses brands like Philips and Nike.