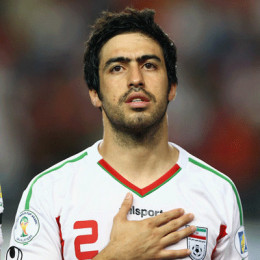 He is an Iranian professional footballer who is currently playing in the Iran's Premier Football League for the Esteghlal FC and in the Iranian National Football Team as a Right Back or Right Midfielder defender wearing jersey number 2. He is very skilled in defending the ball. He started his youth career at Persepolis in 1998 later moving to Esteghlal in 1999 and made his professional debut from the club Aboomoslem in 2002.

There is no information available on his relationship status. It is not known whether he is married or is in relationship and has a girlfriend or is single. He has been discreet and maintains his privacy regarding personal life to avoid the rumors. He loves to keep his personal life out of professional. There are no rumors on him related to women. He is rumored during the transfer season on his transfer.