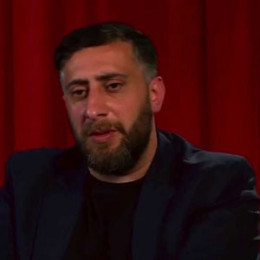 Kida Ramadan is a German actor of Lebanese descent, well-known for his appearance in German television productions and movies since 2003.

Kida Khor Ramadan was born on 8th October 1976 in Beirut, Lebanon. He is the fifth child of a Turkish - Lebanese family of Mohammad Ramadan, a well-earned business man, and representative for Persil Lebanon.

Kida has appeared in numerous movies. His career as an actor began in 2003 when he made his appearance in a TV Movie Every day. The following year, he portrayed in three movies Yugotrip, Kebab Connection and, Urban Guerillas.

Khor has also played in many television series including Special Unit, Underdogs, Berlin am Meer, Lasko-The Fist God, Carlos and much more.

Currently, he plays in the television series Die Letzte Spur and 4 Blocks.

Kida Khor Ramadan married his longtime girlfriend Meryem in 1996. The couple together has a child named Yasmin Ramadan. They now have been husband and wife for nearly twenty-one years and still, the pair shares a strong bond.

Kida Khor Ramadan probably draws a decent salary from his acting career,  his net worth is estimated to be in million dollars.