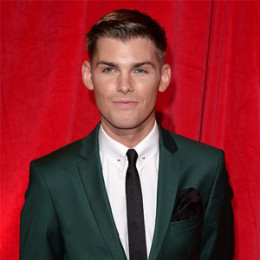 Kieron Mark Richardson an English actor from Eccles, Greater Manchester is Gay and is married to his long-time boyfriend Carl Hyland. the couple is expecting twins through surrogacy.

Kieron Mark Richardson known as Kieron Richardson is an English actor and presenter famous for his role as Ste Hay in “Hollyoaks”. He was born on 12 January 1986 in Eccles, Greater Manchester.

The 31-years-old actor Kieron Richardson belongs to white ethnicity and holds English nationality. He attended high school at his birthplace.

At the early age, Kieron Richardson has presented Channel 4 Online shows “Halloween Live” and “Christmas Live”. On September 15, 2010, he announced on TV program “This Morning” that he is a gay for which he received an avalanche of homophobic abuse through Twitter.

After appearing for a short time in the late night “Hollyoaks: In the City”, Richardson was offered the part of Ste Hay in the early evening Hollyoaks, where he acted for 19 episodes. He left the show as his character in the series was sent to prison. However, on 25 September 2007 he returned to Hollyoaks, and since then he has been a regular cast member.

In 2006, Kieron Richardson appeared in the feature movie Fragments, Holby City, and Heartbeat. He also appeared in pantomime Cinderella as Prince Charming at The Embassy Theatre, Skegness.

In 2010, Kieron Richardson took part in the series of ITV’s “Dancing on Ice” and he paired with series newcomer Brianne Delcourt. Kieron reached the final, but unfortunately, he finished in third place. Kieron and his Hollyoaks ex-co-star Bronagh Waugh began presenting on radio station Gaydio in 2011.

In 2013, Kieron won “Best Onscreen Partnership” with Hollyoaks co-star Emmett J. Scanlan at the British Soap Awards. Since then he has been nominated numerous time.

Well,  talking about the Richardson personal life, he is a married man and very soon he will become a father of twins. He dated Carl Hyland since 2008, and in July 2014, they decided to get engaged.

On 25 April 2015, Kieron Richardson married long time boyfriend, Carl Hyland in a star-studded ceremony in the Peak District. In December 2016, the couple announced they were expecting twins, a son, and a daughter through surrogacy.

The talented English actor Kieron Richardson has an estimated net worth of thousand dollars. He earned a good sum of money through his acting career and his hard work.

Richardson married his long-time boyfriend Carl Hyland on April 2015 in a star-studded ceremony in the Peak District.