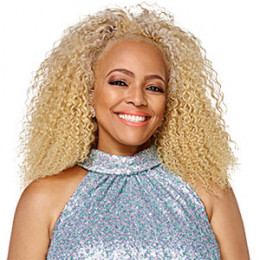 Born and raised in New York City, Kim Fields is American actress and Television director. She is best known for her character as Dorothy "Tootie" Ramsey on the NBC TV series, The Facts of Life and as Regine Hunter on the Fox sitcom Living Single. Fields is active in the entertainment field since the age of 5 but got her major break when she was 9 through popular sitcom Diff'rent Strokes. She earned a good sum of net worth from her acting career and currently, resides in California with her husband and two sons.

Kim Fields was born Kim Victoria Fields on May 12, 1969, in New York City, New York, the U.S. to Chip Fields. She is American and belongs to African-American ethnicity. After her parents' divorced, the custody of her and sister, Alexis Fields was given to her mother. Her mother married Erv Hurd and along with family resided in California.

Fields was encouraged to pursue a career in acting as her mother was also an actress. At the age of 5, she debuted on TV, but her appearance was uncredited.

She graduated in 1989 from the Burbank High School. She was a bright student during her school days and voted Most Talented in 1986. She used to act in plays and was a baseball manager. Later, she attended Pepperdine University earning a degree in telecommunications.

Kim Fields started her acting career as a child artist. In 1978, she appeared as 'Angie Ellis' in a short-lived sitcom, Baby, I'm Back alongside Demond Wilson and Denise Nicholas. At the age 7, she worked in an advertisement for Mrs. Butterworth's pancake syrup.

Then she appeared in two episodes of the American sitcom, Good Times as a friend of 'Penny Woods.' At the age of 9, she got her first major role in the sitcom, Diff’rent Strokes. Fields portrayed the character of Dorothy ‘Tootie’ Ramsey, a boarding school resident. Though she only appeared in five-episodes, it marked the beginning of her acting career. She received critical acclamation for her work.

Feilds reprised the role of Tootie in the spin-off The Facts of Life from 1979 to 1988. The show was known as one of the longest-running sitcoms of the NBC. Though the show was terminated three decades ago, people still recognize her catchphrase, "We're in troouu-ble!". During the first season of the series, producers put her on roller skates due to her short height, to avoid difficult camera angles.

In 1984, Fields released her two singles under the Critique Records label: the disco/Hi-NRG. Her first song "He Loves Me He Loves Me Not" became a minor club hit and her second single "Dear Michael" reached #50 at R&B.

In 1993, Kim Fields appeared in an episode of The Fresh Prine of Bel-Air. Then she starred in the hit Fox sitcom Living Single as Regina "Regine" Hunter. She featured in the series till its final season in 1998. After Living Single, she again focused on her music and started performing rap music and R&B with a group, Impromp 2.

Fields has also directed few episodes of the All That! spin-off Kenan & Kel, telecasted on Nickelodeon. Some of her directorial ventures are Tyler Perry's Meet the Browns, Tyler Perry's House of Payne and BET's Let's Stay Together. She owns a production company, "Victory Entertainment".

She did guest roles in the series like One on One, The Golden Palace, The Fresh Prince of Bel-Air and appeared as herself on HBO's The Comeback. In 2015, Fields participated in the eighth season of Bravo reality TV series, The Real Housewives of Atlanta. While in the show, her fellow co-star said, "Kim was restraining herself and behaving nicely on the show".

After the eighth season there was a rumor that she would be a part of the ninth season but in March 2016, Feilds announced she will not return to the show. She also participates in the 22nd season of Dancing with the Stars where she paired up with professional dancer, Sasha Farber. The pair stood eighth in the competition.

In November 2017, Fields published her autobiography, Blessed Life: My Surprising Journey of Joy, Tears, and Tales from Harlem to Hollywood. Both books talked about her personal and professional journey in the film industry.

Kim Feilds has an estimated net worth of $8 million which she garnered from her acting, directing and authoring career. Her autobiography, Blessed Life: My Surprising Journey of Joy, Tears, is found on the market at $13.71.

As per some online sources, Feilds earned between $75k to $100 k from his roles in TV series. She is also involved in directing and usually, the salary of TV director in the U.S ranges from $500,000 to $3 million/

Kim Feilds is a married woman, she exchanged vows with her longtime boyfriend, Christopher Morgan on July 23, 2007. Their wedding was a private ceremony officiated by Pastor Donnie McClurkin at the church.

The pair welcomed their first child, Sebastian Alexander Morgan on May 4, 2007, and they introduced their son to the world after a week of his birth via People Magazine.

In July 2013, Feilds revealed she was expecting another child in an interview with The Real. After six months the pair was blessed with the second the miscarried between the birth of her two sons.

Previously she was married to Johnathon Franklin Freeman in 1995. The couple failed to handle their married life and split apart after six years of marriage in 2001.

Feilds was ranked #23 in VH1's list of the "100 Greatest Kid Stars". She was arrested during a protest against the police for shooting a black woman in Riverside, California in 1999. She is of Jamaican Heritage and devoted to helping the victims of Hurricane Ivan.

In an interview with Steve TV Show, Kim Feilds credits her mother, Chip, for her success. Let's check out the video below,

Johnathon Franklin Freeman is the first husband of Kim Fields. The duo was together for six years before their official split in 2001.

Kim Feilds is a married woman, she exchanged a vow with her longtime boyfriend, Christopher Morgan in July 23, 2007. Their wedding was a private ceremony officiated by Pastor Donnie McClurkin at the church.

The pair welcomed their first child, Sebastian Alexander Morgan on May 4, 2007, and they introduced their son to the world after a week of his birth in People Magazine.

Quincy Morgan was born on December 3, 2013, in Atlanta, Georgia. He is the second son of Kim and her husband.