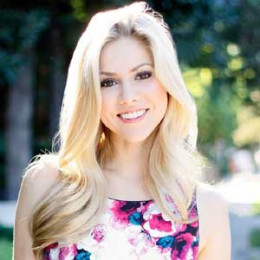 Kirsten Haglund is one of the beauty queens to win the title of Miss America. She is the president of the Kirsten Haglund Foundation, an organization that provides financial aid for women dealing with illness. Kisten is also famous as the lead anchor of the "Morning Briefing" on Styrk.com, an online news network. She is also known to serve as Goodwill Ambassador for the Children’s Miracle Network. She also featured one of SHAPE magazine's Women.

At the early age of 3, she began learning ballet. Since then she was interested in ballet so she left her home to study at the Central Pennsylvania Youth Ballet School. Later, she got the chance to participate in beauty pageants and became the young contestant to win the Miss Michigan title.

Kirsten completed her education from Walled Lake Western High School and enrolled at the University of Cincinnati College, Ohio, where she spent a year studying Bachelor of Fine Arts in Musical Theatre.

Starting as a model, Kirsten eventually established herself as renowned figures in America. She began her career as a model at her early age of 18 and won the crown for Miss Michigan. She got further recognition after participating in Miss America 2008.

Kirsten Haglund represented Michigan and became Michigan's fifth to compete in Miss America and was her state's first person to win the title. She won the title beating her competitor Lauren Nelson, of Lawton, Oklahoma.

In 1944, Haglund's grandmother Iora Hunt represented Detroit, Michigan at Miss America. During the first week as Miss America, Haglund appeared on various shows like Live with Regis and Kelly, Inside Edition, ABC News Now and Fox and Friends.

Haglund then became the President of the Kirsten Haglund Foundation, which provides financial assistance to families battling eating disorders.

The woman with glistening charm and magnetic aura, Kristen Haglund is the dream of millions. Her fans will probably be disappointed because she is already married to her better half. She is married to Ryan Smith since July 2012.

Though, how the couple first met and led their relationship to marriage is not revealed. But the pair was assumed to have been dating each other long before getting married.

It has been over seven years, and we don't see any divorce rumors or extramarital affair at both ends. They haven't yet planned to have any child. But they have a pet named Elsabeth, a poodle.

Kirsten Haglund, a former Miss America and one of the famous name of American fashion history, in her career has achieved a lot and widely recognized globally not only for her glamor but also her most prominent works till date. As of 2017, her current net worth is under review, but she seems to be making a decent amount of salary and living a luxurious life

Kirsten Haglund is a model and a former Miss America and is married to Ryan Smith. She married Ryan Smith in July 2012 and is living a happy life with him. Since past seven years, both share a strong marital bond.