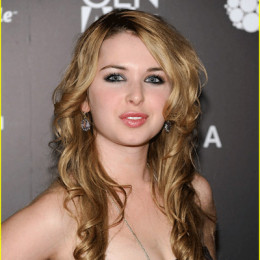 She is a Canadian actress. She made her acting debut when she was 10 years old. It was in the year 2000 and she has been active in the industry ever since. She got success in her career at an early age. She has appeared in several of the popular movies like Elektra, The Twilight Saga: Eclipse, Kyle XY, etc. She is regarded as the promising actress in the industry.

Kirsten Prout is married to her boyfriend turned husband, Matt Zien who is a development director on October 13, 2017. The couple shares a healthy relationship and often shares their cute PDAs on respective social sites.

Kirsten Prout holds a net worth of $1.7 million as an actress.

Kirsten Prout was born on September 28, 1990, in Vancouver, British Colombia. She has a  younger sister, Jennifer Prout. She went to McGill University majoring in English literature.