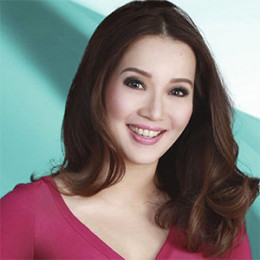 Kris Aquino, a Filipino actress, producer, writer, host, entrepreneur, and endorser, is currently single. She was previously married to James Yap, a Filipino basketball player. Kris was born to father Benigno Aquino Jr. and mother Corazon Aquino. She grew up with her mother. Kris finished her elementary school education at the Poveda Learning Center, and then went for high school studies to the Colegio San Agustin-Makati and later graduated from the Ateneo de Manila University. Kris has hosted talk shows and game shows.

Kris Aquino appeared on the front page of the New York Times at the age of seven. She has produced her son’s debut movie “My Little Bossings”. She played the roles in the films “Feng Shui", "So..Happy Together”. Aside from her TV and movie career, Kris owns and manages several businesses. She was previously married to James Yap, whom she divorced in 2010. She has two children, both of them sons.

James Yap is a Filipino basketball player. They were married for five years and then got separated.

Joshua is her first child from her ex-boyfriend Philip. There is not much information about him.

Kris gave birth to Aquino Yap, Jr. in April 2007. There is not much information about him.