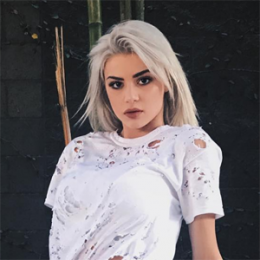 Tenn Choice Award nominated, Kristen Hancher, is a social media personality and Musical.ly celebrity, known for her work as a Musical.ly Star on her kristenhancher musical.ly account. She is also famous for her web series, Mishaps on YouTube in June 2017. Hancher is also a dancer, actress, singer, as well as a soccer player who joined musical.ly in August 2015. She has more than 4.2 million followers on her Instagram account.

Kristen Hancher was born in Canada on 17th May 1999. She belongs to Macedonian ethnicity and holds Canadian nationality. She has a younger brother, Derek Hancher.

Growing up in Canada, Hancher had a keen interest in pursuing a career as a social media personality from her very early age.

In 2015, Kristen Hancher became active on musical.ly and quickly rose to popularity. After she achieved a good recognition as a musical.ly star, Hancher associated with some social media users.

In 2016, Hancher got a nomination for Teen Choice Award for Choice Muser. On 2nd January of the following year, she launched her youtube channel but didn't upload any video on her channel until May 2017.

In May of 2017, Hancher posted a lip-sync of Regret In Your Tears with Nicki Minaj. She currently runs her youtube channel, Muser Family and her web series, Mishaps.

Hancher combines her interest in acting, gymnastics, dance, and music to create the content that she posts on social media.

Kristen Hancher is currently unmarried, but she is in a relationship with Andrew Gregory. The pair began dating since April of 2016. Hancher is very positive and serious about her relationships.

Hancher’s ideal sporting brand is Nike. She is also adept at gymnastics and is an admirer of rap music. Hancher loves to watch movies, and her favorite actor is Jim Carrey whereas 22 Jump Street is her favorite movie.

Kristen Hancher is recognized as the musical.ly celebrity with more than 15 million fans on her self-titled account.

Additionally, Hancher appears in several Commercial Advertisements. As of 2017, her net worth is estimated to be around $400 thousand. She is still very active in her career. No doubt her net worth will go up in coming days.