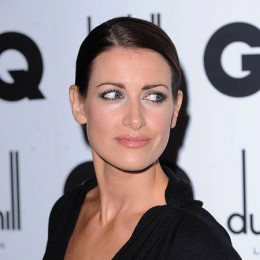 A British beautiful and hot television presenter. She is daughter to Bernard Gallacher and Lesley Gallacher. Her father was the former Ryder Cup captain. She was ranked 20 by FHM's 100 Sexiest Girls of 2002 poll. She is avid supporter of Liverpool Football Club.When she was teenager she wanted to be a fashion journalist so to pursue her career she joined London College of Fashion in journalism and promotion. In the starting of her career she worked as as a production assistant. Later in 1998 she got her presenting break on Sky Sports News, where she is working currently.

Exploring her personal life she was married but due to some personal reason she got divorced. Before her marriage her name was linked with many celebrities. She has given birth to one son from his side. After her divorce there has been no rumor of her having affair with anyone. It seems like she still need time to start new relationship.

They first met each other in a charity event during 1999. They used to live together in Surrey. After a decade of longest relationship they got married but their marriage relationship didn't went well and they divorced. Together they were parents of two sons.

He is the eldest son of the family. Kristy was 30 years old when she gave birth to him.

After his birth the couple get married. His picture along with family can be found in different sites.