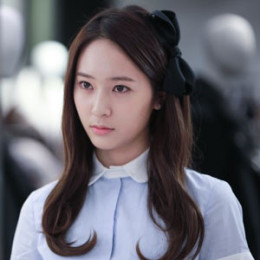 Delightful, cute, and winsome lady of the Korean entertainment world, Krystal Jung is known as American singer and actress based in South Korea. She is an actress best known for her role in Jessica & Krystal (2014), Heirs (2013) and My Lovely Girl (2014). She debuted in 2009 as a member of South Korean girl group f(x). Krystal also participated in S.M. Entertainment's project group S.M. The Ballad.

Singer, dancer, actress, and model, Krystal Jung was born on 24th October 1994, in San Francisco, California, USA as Chrystal Soo Jung. She is a daughter of Lee. Her parents were Korean and settled in the USA during the 1980s. Jessica Jung is her sister and former member of Girls' Generation.

SM Entertainment spotted Jung during a family trip to South Korea in early 2000. The agency offered a cameo appearance in Shinhwa's "Wedding March" music video. At the time she was only five years old.

Krystal Jung debuted as the lead vocalist of the South Korean girl group f(x) in September 2009. She is also popular for her brilliant work as an actress in the drama series ‘High Kick 3' co-starring with Park Ha-sun and ‘My Lovely Girl.'

Krystal also worked in a Lotte commercial with Han Ga. In, Korean actress. Her parents allowed her to join SM Entertainment, and the agency enrolled her in dance classes, including hip-hop and jazz in 2006.

In March 2010, she participated in a series of music videos under the 'Melody Project,' playing a young student who is in love with her music teacher. In 2011, she recorded a solo song entitled "Because of Me" for SBS's drama Sign and a duet with Super Junior's Lee-teuk entitled "Grumbling."

In 2014, Krystal joined the ballad group S.M. the Ballad, initially formed by S.M. Entertainment in 2010. On the group's 2nd album Breath, she sang the Japanese version of the title track "Breath" with TVXQ's Changmin.

On 14th February 2017, she released a collaboration single entitled "I Don't Wanna Love You" with Glen Check's member June One Kim.

In 2010, Krystal Jung won MBC Entertainment Awards in a category of Best Newcomer in a Sitcom or Comedy for her work 'More Charming By The Day'. She also won 2nd Drama Fever Awards in a category of Best Couple with Kang Min-hyuk for her work The Heirs.
In 2015 Jung won 51st Baeksang Arts Awards, Fashionista Awards. In 2016 she won Jumei Award as well as Fashionista Awards.

Krystal Jung began a relationship with singer Kai, pop singer, and a member of the South Korean-Chinese boy band Exo. He was the band's second member to sign with S.M. Entertainment.

The lovebirds are still going strong and are seen wearing matching shoes, bracelets, and other accessories. If their love matches the way they match their accessories, they may even get married.

Krystal Jung has endorsed for brands, played in commercials, acted in TV & movies and is also a singer. This multi-talented personality must probably have a net worth of $500 thousand.