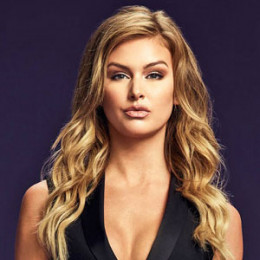 Lala Kent is an American actress and TV personality, well known for her appearance on a popular reality TV show Vanderpump Rules season 4.

Lala Kent was born on 2nd September 1990, in Salt Lake City, Utah, United States of America. Kent was born as Lauryn Kent. He hails from a mixed ethnicity of French, Brazilian, English, and Scottish, and holds American nationality.

In her career time, Kent has been featured in a couple of music videos and lower budget films before she made her appearance on Vanderpump Rules.

As a reality star and working model, she is no stranger in meeting celebrities. She has also worked with David Spade on few projects.

She has been under the knife more than once and isn't afraid of an occasional needle to the face, because of her 'bad genes.'

She has also appeared in Dudes & Dragon. She portrayed the lead role in a 2015 movie called Pitching Love and Catching Fire.

Lala Kent is currently single. She was previously in a relationship with James Kennedy. However, they separated in 2016. In the present, they are good friends.

Lala Kent makes a decent amount of money from her career as a TV personality and actress, as her net worth is estimated to be in six figures.