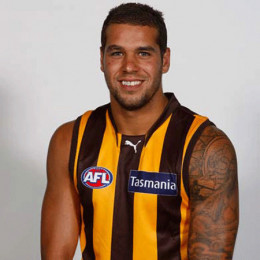 A professional Australian rules footballer who played forward for Hawthorn and the 2008 Australian Dream Team. He is also former player of Hawthorn Football Club for nine seasons. From his young age, he was fascinated towards football and he was a great fan of Melbourne Football Club. When he was just 15 years old, he had won a sports scholarship and boarded at Wesley College. He also played at the AFL National Under 18 Championships. After he was selected by Hawthorn in the 2004 AFL Draft, he showed his talent by scoring 27 goals in his first 20 games. He is also the six-time leading goalscorer for Hawthorn.

Now throwing some lights toward his relationship status, the dashing and handsome twenty eight years old renowned sports player is currently dating with Miss Universe Australian 2010. The couple had made their relationship more stronger with engagement. Prior of being in relationship with her his name was shortly linked with a model. Currently he is living happy and blissful moment with his beautiful fiance.