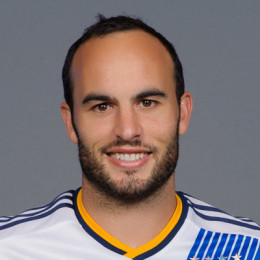 Landon Donovan is an American former professional soccer player who has just announced his retirement from the football after the 2014 FIFA World Cup. He used to play in the United States National Soccer Team and in the LA Galaxy as a winger. He has been one of the most successful players in the history of American Soccer. He made his professional debut in 1999 from the club Bayer Leverkusen II.

Landon Donovan is happily married to Hannah Bartell since 2015. The duo welcomed their first child, son Talon, in January 2016. Previously, he tied the knot to Bianca Kjilich in 2006 and divorced in 2011.

Landon Donovan possesses an estimated net worth of $12 million.

Landon Donovan was born on March 4, 1982, in Ontario, California, the United States to Donna Kenney-Cash and Tim Donovan.

They had dated for couple of years before getting married. Things were smooth but later they got separated in 2009 and followed by their divorce in 2011.