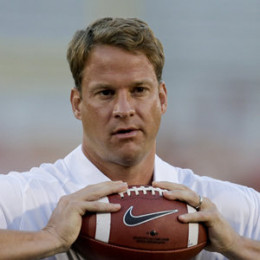 Lane Monte Kiffin is an American football coach and former player. He is currently the offensive coordinator at the University of Alabama. Lane is the son of Monte Kiffin, a long time defensive coordinator in the National Football League. In 1994, Kiffin graduated from Bloomington Jefferson High School in Minnesota and committed to Fresno State University. Kiffin was the youngest head coach in NFL history when he joined the Raiders, and for a time was the youngest head coach of a BCS Conference team in college football.

Layne Kiffin was married to a girl who is a University of Florida alumna. They were married for twelve years and got separated due to some personal disputes. It is believed that they separated as he was unable to give proper time to his wife. They had three kids together and it is until now not fixed who will take the custody of their children.

These two both went to the University of Florida, but it's unclear if they knew each other in college or even attended at the same time. All we know is they got hitched about 7 years ago and have two daughters and a son. On February 28, 2016, Lane and Layla announced that they were separating and have mutually decided to divorce.

The only son to this family was born in January 2009.

She was the first daughter the couple were blessed with.

She is the second daughter and third child to this family.