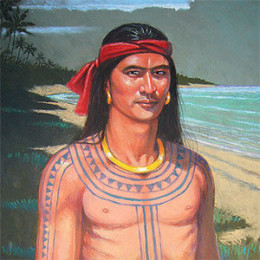 Lapu Lapu was both very intelligent and a great warrior.When Lapu Lapu was just six years of age, he could ride horseback and caribou.When he was 7 he could read and write. At the age of 9, he became an excellent boxer. He also continued to learn other sports as well, such as swimming and wrestling. By the time he was eighteen, Lapu Lapu had become a champion in all of these sports. At 20, Lapu Lapu had defeated both the Bornean soldiers and pirates. It is said that Lapu Lapu's father was Kusgano and his mother was Inday Puti. It is also said that he had a brother named Ming Ming and a grandmother Matang Mantaunas.

He is also regarded as the first Filipino hero because he was the one who resist Spanish colonization.He is mostly known for the battle of mactan, which happened on dawn on April 27,1521.It is said that Lapu Lapu was married to a beautiful princess as there is no any date or anything about their marriage. And there was their child named Sawili who was as brave as his father.Lapu was a great warrior .