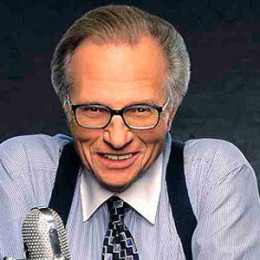 Larry King is an American television and radio host. He has been honored with many awards including two Peabodys and 10 Cable ACE Awards. He hosted television program Larry King Live on CNN from 1985 to 2010.

King was born as Lawrence Harvey Zeiger on November 19, 1933, in Brooklyn, New York, U.S. He is an American belonging to the White ethnicity. He is the son of Jennie Gitlitz, a garment worker and Aaron Zeiger, a restaurant owner.

King received his education from Lafayette High School in New York. His father died of heart failure at the age of 44. He lost interest in school, as he was greatly affected by his father’s death.

After graduating from Lafayette high school, he worked to help support his mother and did not go to college.

He currently hosts Larry King Now on Hulu and RT America during the week, and on Thursdays, he hosts Politicking with Larry King.

Besides his professional career, he is famous for his eight-time marriage with seven women. His last marriage with Shawn Southwick is the only marital relationship that has sustained for the double-digit number.

Even they filed for the divorce recently, but have since stopped the proceedings. So, to say his personal life is far behind to perfection than his flourishing professional life.

Frada and Larry were introduced to one another by his cousin Julie and they were married in 1952 when Larry was 19. Their marriage was reportedly annulled in 1953 by their parents.

Larry and Annette met in 1958 and had a very brief marriage. They divorced in 1962. Annette later married Richard Love. Annette died of lung cancer in 1994.

Alene and Larry were married in 1961 and were divorced in 1963. They divorced after having one daughter. King said, "we really never understood each other" which was the cause for getting apart.

Mickey met Larry when they were both working at the same Miami radio station. They were married on April 19, 1963 and divorced on December 6, 1966.

After four years of their dissolution they remarried in 1967. However this relationship also could not last longer. The second divorce of Larry and Alene was in 1972.

Sharon, a production assistant and Larry were married on September 25, 1976. However after seven years they moved apart. "That marriage didn't work, he said, because they competed for attention."

Larry met Julie on July 11, 1989 at a charity roast of former 76ers coach Billy Cunningham. According to the August 23, 1989 edition of the Cedar Rapids Gazette, Larry proposed after their first date on August 1, 1989 in Chicago. Julie and Larry were married on October 7, 1989 in a Washington, DC restaurant. Guests at their wedding included Ted Turner, William F. Buckley Jr, Lynda Carter, and New York Governor Mario Cuomo. Their marriage was described as "on-again, off-again" and the couple were generally only together on weekends since she kept her residence in Philadelphia and he worked and lived in Washington. Larry and Julie separated in 1990 and divorced in 1992.

In 1997, he married his seventh wife, Shawn Southwick, a singer, actress, and TV host, in King's Los Angeles, California, hospital room three days before King underwent heart surgery to clear a clogged blood vessel. The couple have two children. On King and Southwick's 10th anniversary in September 2007, Southwick joked she was "the only to have lasted into the two digits". On April 14, 2010, both Larry and Shawn King filed for divorce, but have since stopped the proceedings.

The first child who made Larry a father.

Soon after one year from the birth of first child, Andy was born.

She is the first daughter to get birth to Larry king.

She is the only daughter adopted by Larry King.

He is the first child from his seventh wife and eighth marriage.

He is the fourth son to Larry and second son to Shawn.