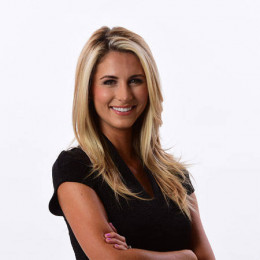 Laura Rutledge is a reporter and host of CNN International, ESPN and the SEC Network. She is an American beauty pageant titleholder from St. Petersburg, Florida, who was named Miss Florida 2012. She introduces herself as a reporter and the host working for the SEC network and CNN International, ESPN. She pursued her graduation certificate from the University of Florida, taking major subject to be broadcast journalism. Laura had kept her personal life away from her professional life as their is very less information on her and her family.

Laura Rutledge was born on October 2, 1988 in St. Petersburg, Florida, U.S. She graduated from the University of Florida, having majored in broadcast journalism.

Laura Rutledge is married to her long time boyfriend Josh Rutledge, infielder for Boston Red Sx of Major League Baseball. The couple married in 2013 but there is no exact information on their date of engagement and marriage, as they have kept it very secret and away from media.

They have not revealed how long they have dated before deciding to turn their relationship to marriage.