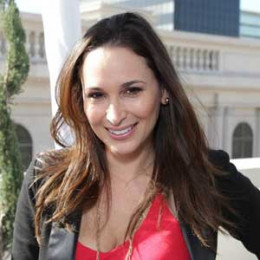 The gorgeous, Laura Saltman is a television personality, actress, producer, media personality plus host popularly known for Access Hollywood. She is living with her son, Brenner who was born in 2011. Saltman is not so active on social networking sites. She also kept her Instagram accounts private. Laura must be currently single as there was no such information about her affairs after the divorce.

Laura was born in 1971 in California, United States. She is an American and is of white ethnicity. Saltman attended Ohio University for almost two years as a communication major.

Later on, she was transferred to Temple University and graduated with the degree in Bachelor's of Arts in Communication.

Laura is the famous host plus producers for various shows like- Access Hollywood (1996), The Sharon Osbourne Show (2003), The Commuter Talk Show (2008) and so on.

Saltman had her own show, Dish of Salt. She also is a senior field producer of the show, The Sharon Osbourne Show that interviews celebrities and hosts musical performances which are presented by Sharon Osbourne.

Laura appeared once again as a producer and also worked on ''One-Air with Ryan Seacrest". She interviewed the celebrities in red carpet too by wearing stunning dresses.

Laura was also engaged with MSNBC and CNN's ''Showbiz Tonight'' where she shared the latest inside news of entertainment industry.

Speaking of Laura's personal life, she was betrayed by her partner whose name hasn't been shared with media.

She met her ex-spouse through the show, Millionaire Matchmaker by Patti Stanger. The show was all about helping wealthy, and demanding men and women find their dream 'mate.

In she show the ex-couple bonded well and even got married. After four months of tying the knot, she became pregnant.

Her ex-husband used to beg her to keep the pregnancy secret. He used to ignore her during the phase. He also cheated on her by talking to his ex-fiancé.

After the birth of the baby boy, Brenner they divorced in 2011 and Laura took the custody of the child.

The reason behind the separation was the pregnancy, and her man scolded her for being in such situation. His ex-husband did not compensate any money and pretended to be bankrupt.

Despite a painful divorce, she is now living happily with her son. There is no such news about her affairs so she might be possibly single in recent days.

Laura kept her net worth secret. She has not shared information regarding her salary and net worth. She might earn enough from the shows in which she appeared as a producer.

Laura Saltman met her ex-husband from the Millionaire Match Maker. After that, they married and divorced only after four months. Laura has a baby boy named, Brenner.

Brenner was born on 2011 to Laura Saltman. After the divorce of Laura and her ex-husband, the custody was given to Laura and is happy now with her son.