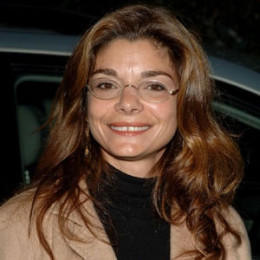 Laura San Giacomo is an American actress popular for her role on the NBC sitcom Just Shoot Me!, film Pretty Woman and Sex, Lies, and Videotape. San-Giacomo is a married woman. Her husband Matt Alder is a well-recognized actor.

Laura San Giacomo was born on November 14, 1962.  She was born to Mary Jo and John San Giacomo in West Orange, New Jersey.

Laura began her career performing in a theatrical show such as Three Sisters, Italian Reconciliation, Romeo and Juliet, and many others. She made her debut in 1987 with the TV series Crime Story followed by Miami Vice in 1989. She was then featured on the daytime soap opera All My Children.

San Giacomo’s came to prominence as an actor when she made her appearance in Steven Soderbergh’s Sex, Lies, and Videotape in 1989. She was even nominated for Golden Globe for her outstanding performance. She also received a Los Angeles Critics Association New Generation Award whereas the film was honored with the Palme d’Or, the Cannes Film Festival’s prestigious Grand Prize.

In 1990, Laura cast in Julia Roberts Pretty Woman with a supporting role. The film was a big hit and generated $178 million at the box office. She then got an opportunity to play in an array of films including Quigley Down Under in 1990, Under Suspicion in 1991, Where the Day Takes You in 1992 and Suicide Kings in 1997. In 2001, she landed the lead role in the Jenifer Estess bio-pic Jenifer, aired on CBS. She also did voice work for the animated series Gargoyles.

Matt Alder is an actor by profession. The pair first met on the set of Miami Vice where Matt featured in a guest role. Subsequently, the pair started dating. The duo got married in the year 2000. The couple, however, shares no children yet.

Previously Laura was married to actor Cameron Dye. The former couple met on the set while shooting for Miami Vice. They tied the knot in 1990 and eventually divorced after eight years of their marriage in 1998. The duo was blessed with a son namely Mason Dye in 1995. Mason is a patient of cerebral palsy.

The 54-year-old actress San Giacomo makes a good amount from her career. She has accumulated an estimated net worth of $6 million. She has well maintained her lifestyle and sticks to her hobby whenever she gets free time. She likes Horse riding, gymnastics, skating, ballet, golf and playing the piano.

Mason is the only son of Laura San Giacomo. He was born in 1995. He suffered from Cerebral Palsy while he was very young.