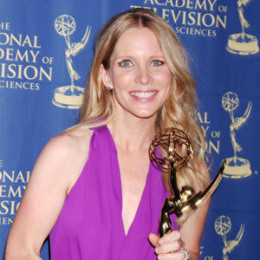 An American soap opera actress, Lauralee Bell is currently married to a photographer, Scott Martin .The couple married on 4th October 1997. She is a daughter of soap opera creators William J. Bell and Lee Phillip Bell. Lauralee is a co-owner of a boutique, named On Sunset, which is in Beverly Hills. Lauralee graduated from the Latin School .She has nominated for a 2016 Daytime Emmy in a category of Outstanding Supporting Actress.

Lauralee Bell is a married person. The couple has two children. They are Christian James Martin ,he was born on January 17, 2001. And her daughter Samantha Lee was born on October 28th, 2002. Bell has won an Emmy Award in a category for Outstanding Special Class-Short Format Daytime Program. Lauralee is a full-time cast member of The Young and the Restless as Christine "Cricket" Blair.

Lauralee Bell is currently married to a photographer, Scott Martin .The couple married on 4th October 1997.

Her first child Christian James Martin, was born on January 17, 2001.

Her daughter Samantha Lee was born on October 28th, 2002.