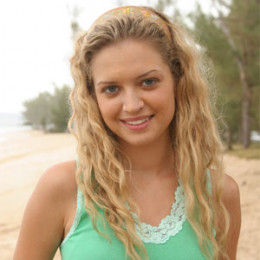 An actress, Lauren Storm played Taylor on the TV series 'Flight 29 Down' with Johnny Pacar.She is popular for her role as Teresa Kilmer, in the film I love you, Beth Cooper. She started modeling at the age of nine. At the age of twelve, she participated in a talent competition, which was held in New York City for aspiring models and actors.

An actress, Lauren Storm was born on 2nd January 1987 in Chicago, Illinois, U.S.A. near a village located in Cook County. She is a daughter of Dave Storm, a dentist, and Barb Storm, a magazine editor. Lauren holds American nationality with white ethnicity.

Her birth sign is the Capricorn, and her full name is Lauren Marlene Storm. Her father comes from a German background, and her mother is Jewish, and she was raised in the Jewish religion.

Lauren Storm graduated from Barbizon Modeling and Acting School of Chicago.She started her career very early she has been a model since the age of 9.

Lauren Storm is best known for her role as Taylor Hagan in the television series 'Flight 29 Down'.She made her acting debut in a two-episode stint on the television drama, called 'Boston Public.'

Her television works are Malcolm in the Middle, 24, Joan of Arcadia, CSI: Miami, Still Standing, 7th Heaven and Drop Dead Diva.She also co-starred in the films including 'The Game Plan, Mrs. Harris and I Love You. Storm has also acted featured in movies alongside Beth Cooper and Megan Fox.

Lauren Storm supported Kids with a Cause, the Olive Crest Foundation, and the Jonathan Jaques Cancer Walk.

Lauren Storm has been in relationships with Jeremy James Kissner, her co-star in the Discovery Kids series 'Flight 29 Down'. The couple dated in 2005 and broke up in 2008.

Lauren is dating Johnny Pacar, a film and television actor and musician best known for his roles as Cody Jackson in the television series 'Flight 29 Down.' Well, the couple looks like they're having a good time and maybe in the future, they will get married and have children.

Lauren's net worth is not revealed to the public yet. But looking at her lifestyle and involvement in charity work she probably has a huge net worth.