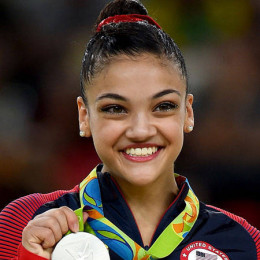 American artistic gymnast, Laurie Hernandez is the daughter of Wanda Hernandez and Anthony Hernandez. Hernandez began her career in 2012 at the U.S. Classic, where she was placed 11th in the junior division at the age of 12. At the National Championships, Hernandez has a score of 57.900 on the first day of competition and 59.550 on the second day, winning the junior all-around title over defending champion, Forsberg.

On 7th August 2016, Laurie Hernandez competed in the Women's Qualification at the 2016 Summer Olympics where the top 8 placing teams get to advance to the Team All-Around Finals. Hernandez has revealed as one of the celebrities competing on season 23 of Dancing with the Stars on 30th August 2016, partnered with professional dancer Valentin Chmerkovskiy. The couple won the Mirrorball Trophy on the episode that aired on 22nd November 2016.