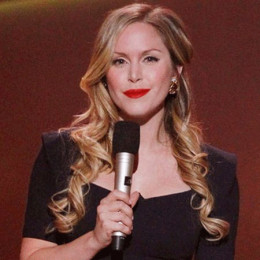 A Canadian television personality who is better known as former MuchMusic VJ from Toronto. She is former host of popular TV show So You Think You Can Dance Canada. She is youngest daughter to Peter Miller and Carla Miller. when she was just 13 years hold she won the title of Miss Junior Dance of Canada. She also attended Cardinal Carter Academy for the Arts. She started her professional carer by joining Much family as a VJ in November 2004. She has already interviewed bunch of popular singers and actors like Coldplay, Avril Lavigne, Rihanna, Matthew McConaughey, Fergie, Dallas Green, Alexisonfire, P!nk, Lily Allen, Gwen Stefani, Halle Berry, Kanye Westetc. Currently she is working as entertainment correspondent for etalk.

Talking about her personal life she is already tied in knot with her longtime boyfriend who is popular musician. There is no record of her dating anyone prior of being married with him. In an interview she stated that her husband is very awesome guy and he has always been supportive to her through out her career. She has not given birth to any child nor she has adopted one.

He is a Canadian musician who releases music under the name City and Colour. After dating two years they got tied in knot with each other.