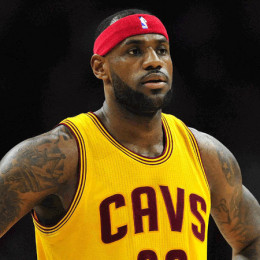 LeBron Raymone James is an American basketball player, currently playing for the Cleveland Cavaliers of the National Basketball Association. He is a recipient of the NBA Rookie of the Year Award, 4 NBA Most Valuable Player Awards, 2 NBA Finals MVP Awards, 2 Olympic gold medals and 2 NBA championships. He was introduced to basketball at the age of 9. He was raised by a single parent, his mother, Gloria Marie James.

Talking about LeBron James' personal life, he now is a married man. He married his high school sweetheart with whom he had been dating since 2000. The two were married in 2013 and together have raised two sons and a daughter. This couple is spotted often at various tournaments and events. Besides that, he had dated few ladies in his past days and also was romantically linked with Amber Rose and Meagan Good.

She is the first and current wife of James. They started dating while they were attending their high school.

He is the first child of James, who is often called by his nickname "Bronny".

He is the second child of James, who was born healthy weighing 8 lb. 6 oz. & 21 inches in length.

She is the only daughter of James. Her date of birth is unknown.