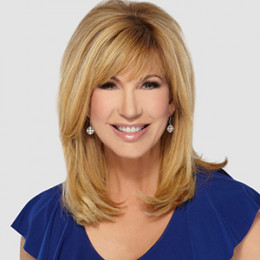 Leeza Gibbons is an American broadcaster best known as a correspondent and co-host for Entertainment Tonight (1984-2000)and her talk show Leeza (1993-2000). She was born to father Carlos Gibbons and mother Jean Gibbons and grew up with her brother and a sister in Irmo, South Carolina. Leeza started her career after graduating from the University of South Carolina with a degree in Journalism and mass communication.

Leeza Gibbons is a Daytime Emmy award winner for outstanding host and has a charity named Leeza’s care foundation. She also appeared on the popular TV show Who Wants to be a Millionaire for a brief period in 2008.  Leeza is a controversial woman who has married four times and is currently married to Steven Fenton, an author, who is thirteen years younger than her. She has a daughter from her second marriage and two sons from the third.

Jhon Hicks is a Jazz Pianist and the first husband of Leeza. They were married for two years and did not have any children.

Christopher is a British actor best known for Coronation Street which he played from 1978 to 1989. Leeza is his first wife and he remarried after getting separated with her. Leeza had two daughters with him.

Stephen is an American actor, architect and inventor and second husband to Leeza. He dated Leeza a couple of years and married her.

Steven is New York Times best-selling author and son of former Mayor of Beverly Hills. He is thirteen years younger than Leeza.

Jordan is the first daughter of Leeza with Christopher. She is famous by the name Lexi Gibbons.

Troy is the first son of Leeza from her third marriage.

Nathan is second child to his father and third to his mother. He is currently in his graduation and is brilliant in his class.