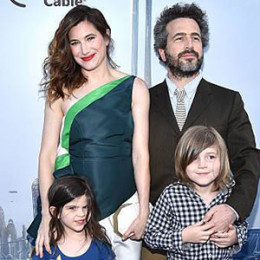 Leonard Sandler is the son of the actor Ethan Sandler and famous actress Kathryn Hahn. He is the first child of them. His father Ethan Sandler is an American actor, known for his works in The Bourne Supremacy, and mother Kathryn Hahn is an actress known for her work in NBC drama "Crossing Jordan". Leonard has a sister, Mae Sandler. He looks adorable and has lovely hair.