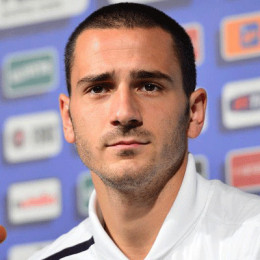 Leo was born in an Italian family, his father was also a football player who played for a B- division club then. His mother was a baker and she earned mostly for the family. He grew up along with a sister, who is now a painter. As a young boy, he was trained by his father before he was admitted to a football school and then joined the local Viterbese F.C. Later, he was loaned out to Inter Milan and then started to appear inn first team.

After he started to play for the club level, there was enough money for the family. He also started to enjoy as a football celebrity in Italy and thus was linked with many models and actresses. With rumors that came out in public, some were bad enough to jeopardize his career as a player. He has been in a long relationship and is a married man as well.

Leonardo Bonucci was married to his long-term girlfriend turn wife, Martina Maccari, a former model. The couple tied the knot in June 2011 and blessed with three children, Lorenzo born on July 2012, Matteo Bonucci born on May 2014, and Matilda Bonucci born on February 2019.

Leonardo Bonucci was born on 1 May 1987 in Viterbo, Italy, under the birth sign Taurus. He is 6 feet 3 inch tall who plays as a center back in football.

He married his former girlfriend and lover who used to be a model. Now, she is Leo's wife and they seem to be together and happy.

Lorenzo was born as the couple's first child, during their holiday span in United States.

Born as the couple's second child, Matteo was born in Italy in their home.